The first bite
Originally uploaded by MCuthbert
Usually we just give Kendall little pieces of watermelon, but last night she was treated to a real silce. I'm very thankful, by the way, that my kids consider fruit a dessert.

I snapped several cute pictures of Kendall eating her sweet snack. If you browse through the photo gallery, you can watch her go back and forth from fruit to rind before Misty finally took it away and cut off the "inedible" part (Kendall got mad when she did).

It might seem strange that anyone would continue to try to eat the tough, bitter green part of a watermelon, but keep in mind, this is the same kid who will eat a lemon, peel and all. Broken clock
Originally uploaded by MCuthbert
Remember the clock that I received back in May to commemorate 10 years of service at al.com?

Brian, one of my co-workers, broke it today.

He was moving around wires and computer equipment on the desk next to mine and the wall that separates the desks shook. My Scott Morse sketch of Misty and myself toppled over and hit the clock, knocking it off the shelf and breaking the glass.

Since I was at lunch at the time, I have no choice but to believe Brian's claim that the incident was an "accident."

Lucky for Brian (who just hit his 10-year mark last week), his clock is safely at home.

Who gets stuck with all the bad luck?

Sadly, Kendall has all but given up on saying "Da Da." She calls me "Mama" now, as she calls most everything she points to "Mama." It doesn't matter if it's her big sister, a dog, or a pillow, everything is "Mama." It's her favorite person and her favorite word, and she reminds me at every opportunity. 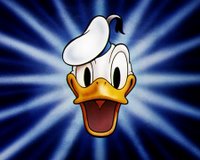 However, she will acknowldge her fondness for Donald Duck. If we walk through the Disney Store at the mall, she'll point to stuffed animals and shirts featuring her favorite character and say "Daah Duck!"

Knowing it would be right up her alley, I picked out a Donald Duck DVD from the library, and last night we watched one of the shorts before bedtime. Kendall was beside herself. She had this big grin on her face and kept repeating "Duck... Duck... Duck... Duck!"

It's adorable, but I miss the brief time when she would only say my name over and over.

I have the cutest kids ever

If you thought her Flaming Lips cover was funny, just wait until you see Emily's improv lullaby for Kendall from last night (you'll probably need to turn your volume up to hear it).

You'll notice that Kendall fusses a bit when Emily stops, so following her off-the-cuff song, Emily endulged her baby sister with a recitation of the book Brown Bear, Brown Bear, What Do You See? -- it's one that always seems to get her calmed down at naps and bedtime.