They think they're special, or something

In flipping through the Sunday newspaper ad inserts, I'm wondering: Why is the "Shrek 2" DVD being released on a Friday instead of a Tuesday (the usual day for video releases)? What's the advantage of Friday over Tuesday, or vice versa?

Update: A little research answered my question. The suspicions in the comments were correct.

I would buy myself a gray guitar and play

Last week, upon hearing Depeche Mode's "Policy of Truth" blasting though the P.A. speakers at her local Publix, Robin posted: "I couldn't understand why the stock guys and cashiers weren't sliding down the aisles on their knees a la a Fame break-out dance scene."

This morning I stopped at the Bruno's near my house to pick up bananas and something from the bakery for breakfast. While there, I heard Counting Crows' "Mr. Jones" on the P.A. That in itself is nothing special, as "Mr. Jones" is one of those crossover songs that fits into pretty much any format. However, as I walked toward the lone open register, I passed an aisle where the stock boys were dancing and singing along with gusto. It was pretty funny.

I didn't linger to watch, but I'm sure the next song, The Jets' "Crush on You," brought them to a screeching halt.

Much like Arizona, babies do not believe in daylight savings time.

So much for that extra hour of sleep.

If you're wondering what the hell the "Anonymous Guy" is talking about (it's not like you can discern anything from his sentence structure), read the comments of this post.

Despite what AG insinuates, I'm not trying to impress that blog's author. I'm quite happily married, so I'm not really interested in joining the dating circuit. Of course, anyone who gives a cursory glance to Impending Distractions can pretty easily discern that fact, but as trolls can't write, I suppose they can't read, either.

Rather, Jennifer is my friend and co-worker (the one with whom I auditioned for The Amazing Race). I helped her set up a blog after hearing about her experience with the It's Just Lunch people ($1,500! Can you believe that?). I thought that such stories would make for good blog fodder and that maybe she could even use her site as an avenue in her dating search. After all, most of the bloggers I've encountered are intelligent, discerning, articulate, and friendly. They've got interesting things to discuss, and they write about those things with passion.

Sorry, Jen. I forgot about the trolls. Don't let their stupidity reflect on the rest of us.

It's too hot in this t-shirt.
It's too cold without a blanket.
My pillow is flat.
Misty is poking me with her elbows.
She's breathing right into my face.
The dog won't quit licking herself.
The baby monitor is turned up too loud.
This Alavert doesn't work worth a damn.

All of the above and none of the above. I've only managed to sleep for three hours, and something is driving me crazy. I just can't seem to pinpoint whatever it is.

As if I wasn't already excited enough about seeing "The Incredibles," now there's this announcement.

(link via Kermit the Blog)

This is what happens when I go out to lunch with my female co-workers.

I just kept my hands at my sides and tried not to look in any particular direction for more than a few seconds.

8-10 miles per gallon? And that's the eco-friendly version?! Can't everyone see how incredibily stupid that is?

Now, this is funny.

I was less amused, though, when NBC-13 promoted this story repeatedly last night for their 10:00 news. Their ads claimed: "We've got footage of Castro's fall." Not only is such wording misleading, but they're hawking a news story about a man tripping!

Finally! A romantic comedy that doesn't make me want to gouge out my eyes!

Bummer. I was really excited about the possibility of both my hometowns being in the World Series. An Astros / Red Sox matchup would have compelled me actually watch baseball.

At least now it's easy to choose who to root for.

On our way to the library last night, there was much fussing from the back seat. Once we got her out of the car, Emily was happer, but it was clear that she would still rather be at home eating dinner instead of browsing for books. We made our library visit a quick one, and upon our return home, I drove while Misty sat in the back in order to curtail any further eruptions.

About a quarter mile from the house, as we passed a small dirt and gravel patch on the side of the road where I've sometimes seen cars parked, there was suddenly a loud bang as if something had exploded. It sounded like it had come from inside the car, but obviously it hadn't since we were sitting right there.

I immediately thought that someone had thrown a bottle at my car and it had burst against the door. I pulled over at the neighborhood pool to check, but neither Misty nor I could find any signs of damage. Surely if a bottle had broken against the side, the paint would be all scratched up, but there was nothing.

Running through possibilities in my head, I then considered that I might had run over a large branch. If it was bent right, it could have acted like a lever, smashing one end into the bottom of the car as a tire pressed the other end. It didn't seem very probable, but it was the best I could come up with.

Whatever it was, I couldn't find anything wrong with the car. The explosive noise would have to remain a mystery.

I had put the incident out of my mind, but as she was getting out of the car at lunch this afternoon, Misty picked up an inch-long piece of plastic off the floor and handed it to me, suggesting that perhaps this was what exploded last night. The plastic piece had clearly broken off something, but it didn't look anywhere near capable of producing the noise we had heard. I fished around under the seat for something else, but found nothing but a couple of pens.

On our way home from work, though, Misty found the something else. A large, tightly-coiled spring rolled out from under her seat, and suddenly it became clear what had happened. Whatever the spring was attached to had given way and snapped. The breaking of the plastic, accompanied by the recoil of the spring had resulted in the loud bang.

So that mystery solved, a new question has emerged: Where does this spring go? It seems that it's time for a trip to the VW service station.

Tell your kids what to think

$24 is way too expensive for something she'd end up wearing once, but I'd love to get Emily this outfit.

The picture is a little hard to make out, but the shirt reads "VOTE. I'm a baby... what's your excuse?"

This one is even better, but where's the "Daddy" version?

A couple weeks ago, my editor told me that Impending Distractions had been named for an award in Birmingham Magazine and offered me his congratulations. He wasn't sure exactly what the honor was — he'd simply heard about it from our CEO. I looked around the office where we usually have a copy of the magazine, but I could only find the previous month's issue. Looking toward the Internet, I found that Birmingham Magazine does not publish their content online.

Oh well. I figured it couldn't be that big of a deal if I hadn't heard about it first-hand. I forgot about it for a while.

On my lunch break today I went to the Homewood library to read. However, I'd forgotten the book I'm working on (now five days overdue), so I sat down to flip through magazines instead. I decided to see if I could uncover the mystery behind this apparent award.

The September issue of Birmingham Magazine provided the answer. In their "Best of Birmingham" article noting "the people, places and things you won't be able to live without," Impending Distractions was named Best Blog. It said: "Get wrapped up in the day-to-day life of Birmingham Blogger 'Matt' on his Web site www.cuthbert.ws/blog." I was shocked.

In the meantime, my posting of late has been sparse. If I'd known that new people might be checking this page out, I'd have put a little more effort into giving them something to read.

Anyway, to Birmingham Magazine: Thank you!
And to anyone who's found this site as a result: Welcome.

The temptation of vegetables

Last year Misty put together a cornucopia full of little pumpkins, gourds, and silk flowers. Unfortunately, it was constantly under siege by the evil kitty, and it didn't last very long.

This year, with no evil kitty to eat the display, Misty is more hopeful that her efforts will last through Thanksgiving.

Emily wants those gourds really badly. So much so, in fact, that she began to crawl this evening in order to get to them.

It's a slow, labored crawl — like someone trying to crawl with two broken legs, Misty said — but she's crawling. She made it over to the treasure trove of dry vegetables and promptly inserted a gourd into her mouth.

That cornucopia is doomed.

Catching up with yesterday's technology

Next Tuesday will mark a milestone in my Internet life. On that day, I shall finally join the rest of you in the 21st century, getting high-speed access at home.

I've been suffering though this 24Kbps dial-up connection for too long.

Maybe next I'll get a cell phone. But don't count on it.

This morning as I was changing a particularly full diaper from Emily, Misty poked her head in the room to see what was going on. "Wow," she said. "There's so much poop in there it's almost as much as a human's."

Perhaps in our constant playful reference to Emily as the chupacabra, Misty has forgotten that she is indeed human.

McDonald's is the place to rock

Misty and I just watched "Super-Size Me." It was a decent movie — Spurlock's experiment didn't tell me anything I didn't already know, but it was fun to watch. The highlight of the movie though, was when the soundtrack broke into "Rock n Roll McDonald's" by Wesley Willis. It was a brilliant inclusion. And of course, I sang right along (though not quite as poorly as Wesley).

I need to get onto "Queer Eye for the Straight Guy." I think it's my last shot at reality television.

Returning from the Centennial State

I've been back from vacation since Sunday, but I'm finally getting around to posting today. Our vacation was exhausting (as vacations can be), so it was nice to have a few more days off afterward. Between events surrounding the wedding and visiting with family, we didn't get to see nearly as much of Denver as we would have liked. Nevertheless, we had a great time (except for at night when Emily, who, effected by a stimulus overload of new people and new surroundings and a cold to boot, decided to kick her fuss into overdrive).

Anyway, here are a few photos from our trip to Colorado. 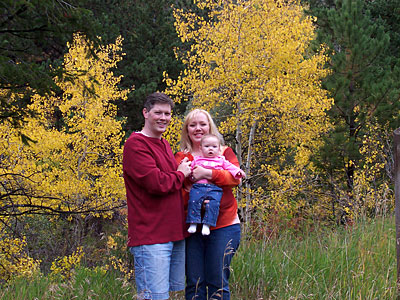 Misty, Emily, and I enojy a day exploring outdoors. 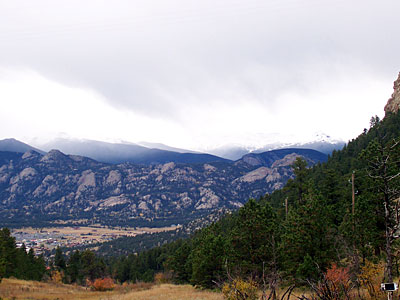 You can just barely make out the snow-capped mountains in the distance. 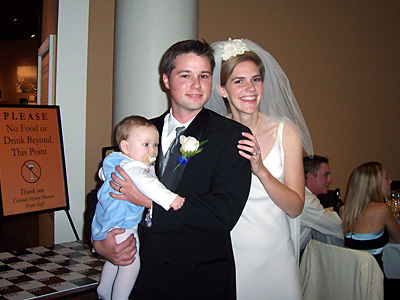 My brother and his new wife hold Emily. 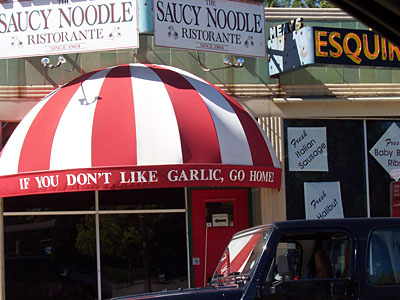 This would have been a great place to eat before the wedding. 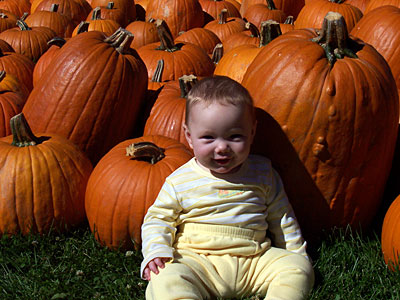 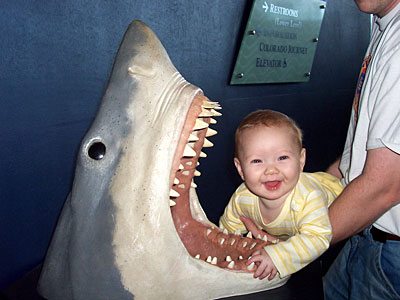 I suppose this is what happens when your only knowledge of sharks comes from "Finding Nemo."

Emily has lots more pictures on her blog.