Misty called to tell me that she made spinach dip this morning. And that Emily helped.

Apparently, Emily's role in the process was to stir the dip. When I heard this, I immediately asked: "How much landed on the floor?"

"None got on the floor, miraculously enough," Misty told me. "But she did get some on her hands and proceeded to fling them around and cry as if the dip was burning her."

That didn't sound too bad.

Misty continued: "Then at one point, I turned around and she was sticking a huge spoonful of mayonnaise in her mouth, and she shuddered."

"... And then I turned away for a second to put something in the sink, and when I looked back, she was stirring the dip with her pen for the AquaDoodle."

We've been driving around looking at Christmas lights over the past couple weeks, and Emily has picked up an amusing habit. Whenever she sees a particularly festive light display, she squeals, "ooooh!"

It may not seem like much from my description, but it's really cute.

I can't wait to see how she reacts to ZooLight Safari.

We've been watching a lot of Sesame Street at home lately. It holds Emily's attention far better than Higglytown Heroes. She's learned to say "Ernie" and "Elmo" (though to the untrained ear, it sounds more like "Uh-ee" and "Mo-mo") and can identify those two characters as well as Telly, who are all part of her bathtub playset.

As we were getting ready for bed last night, Misty and I were talking about classic Sesame Street skits that we remembered from our own childhoods. I mentioned the annual Christmas special where Cookie Monster kept trying to contact Santa, but was thwarted by his own appetite as he ate first his paper and pencil, then his typewriter, and finally his telephone.

Misty then said to me as if it was some sort of revelation, "Have you ever noticed that Cookie Monster doesn't really eat those cookies? They just crumble up and go everwhere, but nothing goes down his throat."

The number of the day

It has come to our attention that Emily knows how to count. We had no idea she could do so, and we assume they've been working on it at KinderCare.

She doesn't exactly count — it's more like a series of random vowel sounds. Nevertheless, she has the rhythm down, and it's obvious that she's trying to imitate counting.

Here's the crazy part, though. Misty was counting last night and Emily was making noises along with her. Emily's version went something like this:

It blew me away that she knew eight and nine. Not only did she make the right sounds, but she said them in the right place. And she wasn't repeating after Misty, either — she was saying the numbers in unison.

We've tried counting several more times since, and usually have the same result.

My kid knows eight and nine!

I was in the living room folding laundry this evening while Misty gave Emily her bath. As they were drying off and putting on a fresh diaper, Emily passed gas. It cracked her up, and she proceeded to clench and concentrate in an effort to reproduce the experience. I didn't see this, mind you, but Misty was providing ample commentary. All of a sudden though, I heard a roar of "Grrrraaaaaa!" as Emily tried with all her might to fart.

These are the stories that are bound to resurface in 15 years or so.

I thought this was pretty funny. 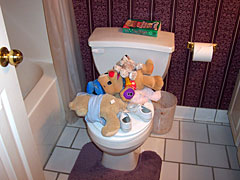 Emily has begun learning about the potty at home. This morning, she piled several of her stuffed animals (and her shoes) on top of the toilet. I guess she was implying that they each needed to go.

It seems that with the latest batch of pictures I uploaded, I've gone over my 200-photo limit on Flickr. I'm now debating whether to sign up for the paid "pro" account.

What do y'all think? Is Emily cute enough to justify paying $24.95 a year for unlimited photo storage?

On the day before Thanksgiving, one of Emily's classmates celebrated a birthday. The mother sent cupcakes to share with the other kids. Blue cupcakes. With blue icing.

This was the scene when Emily arrived home.

And that's after she'd been washed.

The next day, all the family had to crowd around and stare at Emily's blue butt when whoever was changing her exclaimed, "Oh my God! Look at this diaper!" I won't show you the picture Misty took of it.

Apparently, Emily's wasn't the only one in her class to be afflicted. When I filled out her daily report sheet on Friday, I wrote "blue bottom" in the blank for any new injuries, symptoms, or conditions. When I got the sheet back at the end of the day, the teacher had responded by writing, "everybody."

It took about four scrubbings in the bath before all the blue came off.

Today is one of those days that reminds me just how cool my job is. I just got word that Mo Rocca (of The Daily Show and Best Week Ever) will be participating in a live, interactive chat on al.com next month.

I don't know a concrete day or time yet, other than that it will be before his January 21 performance at the Alys Stephens Center.

Misty seems to think that I can parlay this event into her having lunch with Mo Rocca. I'm not sure that's a good idea considering her admission that she has "a big crush on him."