This blog has moved


This blog is now located at http://matt.cuthbert.ws/.
You will be automatically redirected in 30 seconds, or you may click here.

Gate closed? No problem. These girls make their own fun, originally uploaded by MCuthbert.

Kendall's birthday party almost didn't happen this weekend. She'd requested a party at Vestavia's Wald Park, which she loves because the playground is set up like a big wooden castle. Unfortunately, with an outdoor event there's no accounting for weather, and as the day drew closer, rain appeared imminent.

On top of that, almost everyone who was invited (just family) said they couldn't make it. My dad was prepping for a colonoscopy, so my parents were out. Two of Misty's cousins had to work. Then another of Misty's cousins -- the one who would have been bringing the kids -- called the morning of the party to say she wouldn't be making it, either.

Suddenly we were faced with hosting a "party" for Misty's mom and her aunt & uncle. And while Kendall loves them all dearly, that's not a very exciting guest list for a 3-year-old.

Misty was pretty upset about it and was ready to just throw in the towel. I knew it would break Kendall's heart though, to hear that her birthday party was cancelled because no one was going to show up. I got on the phone and called up a couple friends from church who have kids around Kendall's age, explained the situation, and asked if they could join us at the park for a while.

Tasting the cake
Originally uploaded by MCuthbert
Our friends saved the day. They didn't even hesitate -- they just said, "we'll be there."

Kendall never knew the difference. Instead of her little cousins, she had Addison, Kennedy, Tyler, Nolan, and Liliana to play with at her party, and she had a great time.

The intermitent rain, too, turned out to be a blessing, because it created a means for us to encourage the kids to leave the playground for a few minutes to eat. After pizza, the shower ended and they were back running around again. When another spurt of rain hit, we rounded the kids up for cake. Back to the playground for a while, then another shower meant it was time to open presents. It worked out perfectly.

Here are a few more pictures from the party.

I am so thankful for our friends who came through at the last minute to help make it a special day for Kendall.

A trip to the Georgia Aquarium

Watching the fish
Originally uploaded by MCuthbert
We made a trip to the Georgia Aquarium this weekend since I got a pair of comp tickets for something called "Planet Shark Blogger Day." For four years since it opened, we've been wanting to go, but it just never happened -- we'd always heard it was super crowded, so we waited. Our delay didn't seem to help much, as the aquarium was still packed with people, but we were very happy to finally take the plunge.

The girls had a great time there -- even though most of the time they just bugged us about going to the playground with the whale slide. Misty and I could have spent all day there watching some of the exhibits. The huge tank with whale sharks, manta rays, etc. was our favorite. One particular manta ray named Nandi kept doing flips as if showing off for the people on the other side of the glass. We were disappointed that we missed the beluga whales, though -- they were off exhibit the day were were there.

Here's my complete write-up about the Georgia Aquarium (with video), and more photos from our visit.

After we left the aquarium, we had planned to go to Old Spagetti Factory to celebrate my birthday. Alas, when we arrived we found it boarded up with a sign on the door saying it had closed down. Bummer! It was one of our favorite restaurants. Since we were already hungry, we didn't want to spend a bunch of time looking for another suitable place to eat, so we wound up eating at a nearby Whole Foods. That turned out to be fun anyway. In high school or college, I would have readily named Toad the Wet Sprocket as one of my favorite music artists. Last night, I had the opportunity to film an exclusive acoustic rendion of their song "Dam Will Break" by the band's lead singer Glen Phillips during his sound check before a concert at WorkPlay Theatre. Even better, Vienna Teng joined him on piano for the song. My job is so cool. 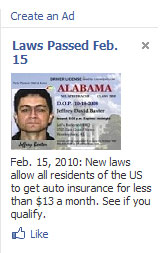 I was on Facebook today when I came across this ad on my profile page. It's one of those that pulls your zip code and delivers a result geared toward your own location, thus the weird looking Alabama driver's license.

What disgusts me though, is the photo. I've been seeing a lot of photos lately that look like they're using mug shots -- some creepy looking guy with scraggly hair and a long beard (yeah, if you have a beard, I am totally judging you) shows up on an ad for mortgage rates or something like that. The photos don't seem to match the subject of the ads, but they certainly grab your attention.

This time you can actually recognize the mug shot. It's a pretty famous one. The photo is squished down a bit, but that's Mohamed Atta, one of the 9/11 hijackers who helped fly a plane into the World Trade Center.

It's not exactly the face that would convince me to buy a product or service.

Valentine's Day streches into a week

Valentine's Day started out with heart-shaped pancakes and pink milk, thanks to Misty.

Last night she and I went out to see the movie "Valentine's Day" then had a brief dinner at Whole Foods before moving on to the main course -- dessert at the "Wild About Chocolate" fundraiser for the Alabama Wildlife Center.

You may notice from the picture that some of Misty's flowers seem to be drooping -- that's because I got them for her on Monday so she'd have them to look at all week in her office. On Tuesday (when I took a day off work to get the garage door fixed) Kendall and I brought her some heart-shapped donuts from Krispy Kreme. Misty's co-workers suggested that I do something for her each day of the week, so I did my best at coming up with different things. I think their enthusiasm for this idea may have had more to do with wanting to suggest it to their own husbands, though.

We enjoyed a rare snowfall today in Alabama -- so much so that Misty and I were both sent home from our places of work. Jefferson County schools were also cancelled for the day, so Emily got to stay home.

The girls loved playing in the snow, though from the pictures it looks like Kendall was most interested in eating it (Misty made some snow ice cream later). They ran around throwing snowballs at each other, and Misty and Emily made a pair of snowmen (neither of which lasted long before they toppled over).

Here are a few more photos from our snow day, and some video footage.